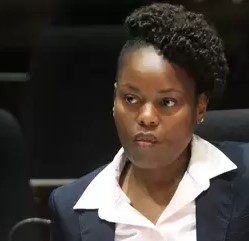 The PIC is a state-owned company that holds more than R2 trillion (121 billion euro) in assets. It is Africa’s largest asset manager and holds large stakes in several South African companies. Some 98% of value owned or overseen by the PIC belongs to the South African Government or its employees, including dozens of social security, pension, provident and other funds.

An admitted attorney and conveyancer with a specialisation in commercial law, Mathebula was hired by the PIC in 2015. As a company secretary, Mathebula’s role was to be present at PIC board meetings. Highly sensitive discussions around Matjila’s alleged criminal activities and PIC whistleblowers resulted in Mathebula being the sole custodian of minutes when the board requested no further audio recording take place.

The PIC used disciplinary proceedings against Mathebula to harass her, injure her reputation and ruin her financially even though the evidence against her was contradicted by the PIC’s own records.

Matjila is now a key focus of the Commission investigating the activities of the Public Investment Corporation where Mathebula testified. She was ultimately reinstated.

Mathebula told the Commission that she believed the suspension and disciplinary action “were part of a general pattern of victimization of employees at the PIC suspected of having a hand in bringing wrong-doing at the PIC to light.” She continued, “When the former CEO informed me that he no longer trusted me and wanted me out, what I believed was actually being communicated to me is that I was not trusted to keep quiet about irregular occurrences at the PIC.” Mathebula credited PPLAAF during her testimony for supporting her on the basis that, “even though I did not rely on a whistleblowing defense in my disciplinary matter, I was being persecuted on suspicions that I was one.”