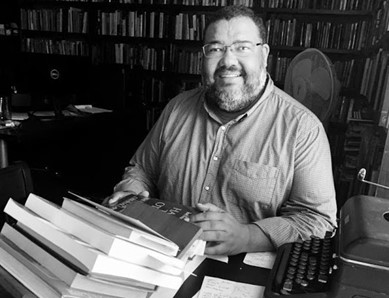 My conclusion then was not that Bain is just hiding stuff, my conclusion was Bain was part of masterminding state capture
Thank you PPLAAF for standing by me when many others have shrunk away. Knowing that I am not alone makes the world of difference !

Athol Williams is a successful author and poet who has won several awards for his writings. After graduating from the most prestigious universities including Harvard and Oxford, he was simultaneously an academic, NGO leader and consultant. Today Athol Williams is unemployed and unemployable after he revealed the involvement of former colleagues and mentors at Bain & Company in state capture.

Athol Williams began his career with the Boston-based international strategy consulting firm in 1995 as an apprentice and then as a strategy consultant. Even after leaving in 2010, he maintained a very good relationship with the firm and returned to work there several times over the years.

Bain & Company’s involvement in the disastrous management of SARS

In 2018, Athol accepted Bain & Company’s request for assistance when they were accused of dismantling the South African Revenue Service (SARS) by the Commission of Inquiry into Tax Administration and Governance in SARS chaired by Judge Robert Nugent. Known as the “ Nugent Commission “, this Commission was established by President Ramaphosa on May 23rd, 2018 after he announced measures to stabilize SARS and restore the institution’s credibility.

Bain & Company hired the law firm Baker McKenzie to conduct a supposedly independent and objective investigation : “We want to be absolutely certain that we entered into our Sars engagement in full compliance with applicable procurement laws and that our investigation’s findings are accurate and unassailable”.

Then a lecturer in business ethics at the University of Cape Town (UCT), Athol Williams was appointed by Bain & Company from September to December 2018 as an independent consultant to oversee the investigation conducted by the law firm and ultimately write a report on its reliability and authenticity for the Nugent Commission.

However, the law firm and the leaders of Bain & Company refused to give Athol Williams the law firm’s final report, despite his repeated requests. In fact, he never had access to these documents, nor did the Nugent Commission.

This refusal was a red flag for Athol Williams showing that Bain & Company actually had a lot to hide despite its apparent willingness to make amends. But at this stage, he still had no evidence of the international firm’s involvement in state capture. In his final report in December 2018 for the Nugent Commission he would only indicate) his inability to make a judgement on the reliability of the investigation conducted by Baker McKenzie and Bain’s failure of transparency.

The Nugent Commission completed its final report to President Ramaphosa on December 11th, 2018, in which it accused Bain & Company of colluding to damage SARS, part of which included the departure of 200 SARS senior professionals, the closure of some units and the undermining of the agency’s performance. The commission also recommended that the Attorney General’s Office pursue criminal charges in connection with the awarding of a R164 million (9.2 million euros) contract by Tom Mayane - former Commissioner of SARS - to Bain & Company.

In response, Bain & Company refunded the 9.2 million euros fees plus interest for the mission carried out at SARS in September 2018. The consultancy firm also undertook to “ learn the lessons of this episode and to implement appropriate measures to prevent it from happening again “. And in 2019, Bain & Company decided to recall Athol Williams to help implement and steer a remedy plan and to serve on their new African Oversight Board. Still a lecturer at UCT, Athol Williams then became a part-time partner at Bain & Company with the idea of creating a genuine corrective mechanism.

” They were uncomfortable with the questions I was asking “ said Athol Williams.

So in August 2019, Athol Williams resigned from Bain & Company. In an interview with NewzRoom Afrika journalist Xoli Mngambi, Athol Williams said : “As soon as I felt that Bain & Company was not involved in this remedy plan and that they were not willing to be completely honest with South Africa about what had really happened, I couldn’t stay there because it meant that I became complicit in what they had done”.

The need for effective support for whistleblowers in South Africa

In November 2019, Athol Williams offered his services to the Judicial Commission of Inquiry into Alleged State Capture chaired by Judge Raymond Zondo, known as the “ Zondo Commission “. The Commission subsequently asked him to transmit the documents he still had in his possession and to compile them into an affidavit.

Athol Williams then took six months to draft his 700-page affidavit out of the nearly 500 documents in his possession. Forsaken by the UCT, where the Director of the Alan Gray Centre for Values-Based Leadership where he worked forced him to resign, and by civil society and journalists despite his numerous requests, Athol Williams was able to find a hearing and legal support with PPLAAF.

“When most organisations turned their back on me, PPLAAF was there“

It was while writing his affidavit for the Zondo Commission and analysing the 500 documents in his possession that Athol Williams came to the conclusion that not only had Bain & Company hidden a number of serious matters, but that the firm was part of masterminding state capture.

PPLAAF also carried out an extensive investigation into the capture of SARS, supporting and corroborating Athol Williams’ statements. In particular, it was found that Bain & Company had close ties with former President Jacob Zuma to promote the political objectives of the ruling ANC (African National Congress) and to reshape the South African economy to their advantage. Furthermore, the overall findings demonstrate that in reality, Bain’s reimbursement of the 9.2 million euros fee, demonstrating its supposed good faith, by no means equals the losses actually caused by Bain to the South African economy.

Ethical and dedicated to his country, Athol Williams lost friends, career and income to defend South Africa’s interests. His disclosures have taken a heavy toll on his health and family. According to Athol Williams, Bain & Company tried to put pressure by bribing him to keep quiet and threatening him through its lawyers. The consulting firm has indeed a lot to lose, both in South Africa and in the US : “ Bain had informed the US Department of Justice of the matters in which they were involved, and they could not deviate from that version “, said Athol Williams.

During his testimony to the Zondo Commission, during and after which he received legal support from PPLAAF, he called on Judge Zondo to provide real protection for whistleblowers, without whom the Commission would not be able to access certain information, as Judge Zondo himself admitted.

In June 2021, Athol Williams published his sixth poetry book titled “ Whistleblowing ” in which he reflects on his harrowing ordeal and the injustices in South Africa caused or upheld by political and corporate corruption.