On July 2nd, 2020, a joint investigation by PPLAAF and Global Witness, “Undermining sanctions”, uncovered evidence indicating controversial mining magnate Dan Gertler allegedly used an international money laundering network to attempt to evade US sanctions and continue doing business in the Democratic Republic of Congo (DRC). This scheme seems to have allowed him to funnel millions of dollars abroad and acquire new mining assets in DRC. We had been working on this investigation for more than a year with Le Monde, Bloomberg and Haaretz in Israel.

The groundbreaking evidence has shown the workings of Gertler’s complex business empire and a system designed to conceal the movement of millions of dollars. This scheme would allow Gertler to continue reaping the vast financial benefits of his business deals in DRC, despite being sanctioned by the US Treasury Department in December 2017 for “opaque and corrupt mining and oil deals”. 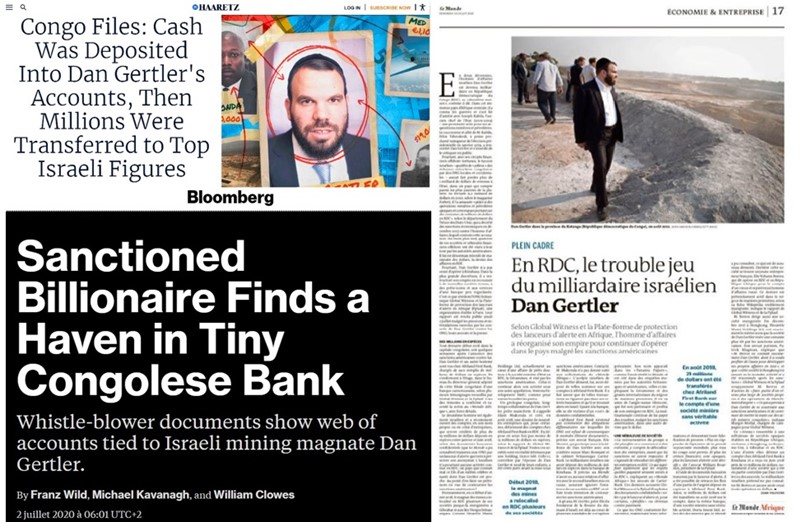 The sanctions against Gertler, a close personal friend of DRC’s long-time former President Joseph Kabila, prohibit him from doing business with US citizens, companies, or banks. PPLAAF and Global Witness have revealed evidence indicating that despite this, Gertler may have found a way to continue to handle US dollars, consolidate his fortune and even acquire new assets in DRC. The revelations highlight critical loopholes and lapses in international sanctions enforcement and anti-money laundering frameworks, with lax banking regulations, lawyers and corporate secrecy enabling the scheme.

The report also showed how two major international mining companies operating in DRC, Sicomines and ERG, appear to have made payments to customs and logistics agencies controlled by Gertler or his associates while Gertler was already under US sanctions. The multinational commodities giant Glencore, which has ties to Gertler stretching back to 2007, has also continued to make highly controversial royalties payments to him, despite US sanctions. The report’s findings suggest that Gertler relocated his business interests from secretive offshore tax havens to DRC with the help of proxies. Gertler and his network of proxies then set up bank accounts at the Congolese branches of Cameroon-based Afriland First Bank. New names started to appear on both companies and bank accounts connected to Gertler in a variety of subtle ways, including the name of someone implicated in a VAT carbon tax fraud costing the EU €5 billion.

In total, between June 2018 and May 2019, at least $100 million flowed through bank accounts associated with this network. Much of it was denominated in US dollars, despite the US sanctions, and almost 70 percent of it was deposited in cash into accounts apparently connected to Gertler or his associates.

Among the various transactions revealed, at least $21 million was sent to unknown accounts held outside DRC and $25 million was sent to DRC’s controversial state-owned mining company Gécamines. Gertler seemingly used proxies to make these payments to Gécamines in exchange for new mining licenses, just before the 2018 elections. This is reminiscent of deals Gertler did with the state miner before the 2011 elections – a scheme that contributed to the imposition of sanctions for “corruption”.

In the backstage of PPLAAF’s disclosure, there are also threats, intimidations, and blackmails against the NGOs and the press. Prior to the publication, Gertler’s lawyers sent us a series of letters over more than 2 months that included wild accusations against both Global Witness and PPLAAF and threats of legal action. The day before the publication, dozens of conspiracy videos flourished on Congolese social networks against both organisations. The report was followed with a criminal complaint against both organisations and a libel suit in Israel against Haaretz. Both organizations obviously criticized the tactic as a SLAPP procedure.

PPLAAF and its chairman have been subjected to other direct threats openly intended to inhibit publication. Journalists were under threat too: an Haaretz journalist working on the investigation reported Gertler threatened to “finish his career”.

Following the report, PPLAAF has led a campaign in DRC alongside the «Congo is Not for Sale» coalition to fight for concrete measures to be adopted. The campaign included a social media campaign and a call to reform the banking sector. PPLAAF-supported whistleblower Jean-Jacques Lumumba was one of the campaign’s major spokespersons during this period.

In September 2020, Nobel Prize winner Denis Mukwege and Congo is Not for Sale spokesperson Jean-Claude Mputu attended the European Parliament commission on human rights and demanded to stop impunity and protect whistleblowers in the Congo. Several EU MPS regretted that perpetrators of corruption could continue their business activities within the European Union.